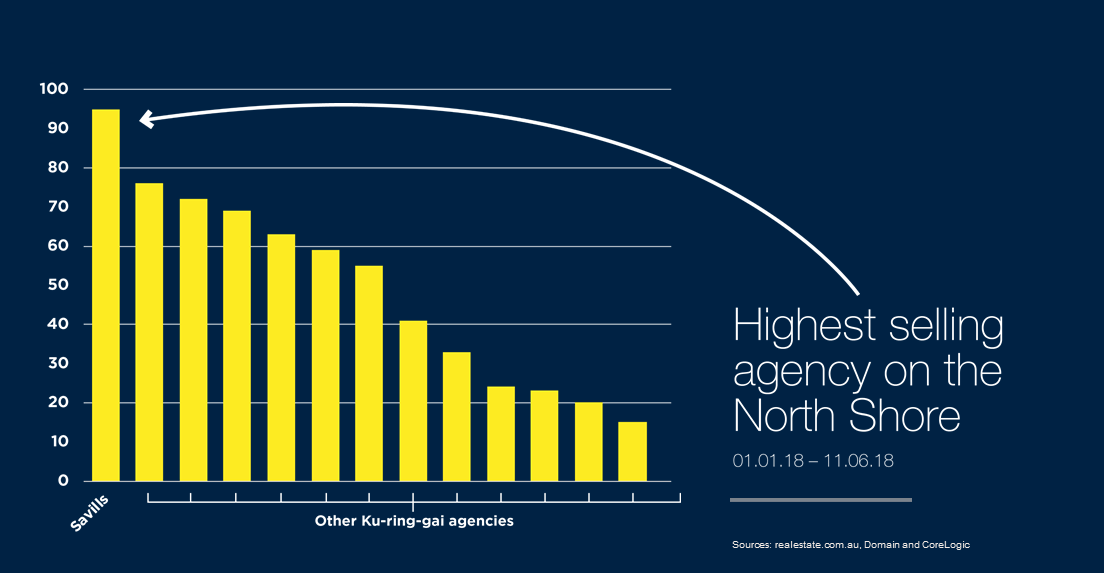 With five offices on the upper North Shore, Savills has had a stellar start to the year, selling more properties in the first half of 2018 than any other agency in the area.

Savills has negotiated the sale of 95 properties on market, compared to the second highest competitor agency selling 76 properties on the North Shore. In addition, Savills sold 45 properties off-market to qualified database buyers.

Amidst challenging market conditions and negative media coverage about falling property prices, our team have gone above and beyond to build trust with motivated vendors, highlight property’s unique selling features through effective marketing and negotiate the best result for vendors and buyers.

There has been strong interest in premium family homes on the North Shore from local and out of area buyers. The appeal of highly-acclaimed local schools, fantastic transport links and community atmosphere are the draw card to the North Shore.

Examples of premium family home sales this year include:

The highest apartment sale in the first half of 2018 was made in March by William Chan, Charles Caravousanos and Elizabeth Bailey for an apartment in a new development in Lindfield for $2,050,000. The highest sale for a house was made in April by James Levy for a 5 bedroom master-built home in St Ives that included a sweeping staircase and sparkling in-ground pool. Developers have scooped up blocks in Lindfield and Killara for between $4,500,000 and $7,000,000.

There has been renewed interest in vacant land and knock-down-rebuild blocks including 303 Bobbin Head Rd, North Turramurra which was sold off market to a database buyer by Ross Mundy for $2,450,000 – a record price for a knock down rebuild in the suburb. A family from Liverpool snapped up 50 Park Ave, Chatswood that was sold by William Chan and the family plan to build their dream home.

In addition, certain streets have seen big changes, with four blocks sold by Ross Mundy over the past six months in the short cul-de-sac Myall Ave, Wahroonga. 1 and 1a Myall Ave were sold off market for almost $6,000,000, while 1D was sold for $2,075,000 and 1B was sold at auction for $2,020,000. Craig Marshall and Jessica Liu negotiated the sale of three blocks in Dumaresq St, Gordon in March and April.

The St Ives property market is bucking the trend with median prices actually increasing. James Levy has sold 19 properties this year, with sales ranging from $1,051,000 to over $3,000,000. Due to his success over the past 12 months, James was ranked as one of Australia’s top 100 agents nationally by Real Estate Business in June.

James Yahl has been leading the charge with St Ives apartment sales, selling 11 apartments this year, with highlights including 412/36-42 Stanley St, that sold after one open home for a complex record price for a 1 bedroom of $775,000; and 311/1-3 Sturt Pl, selling prior to auction for a complex record of $890,000.

Off market sales have been strong with our database being one of the largest on the North Shore. Selling the most number of properties means we meet the highest number of active buyers at our open homes. Off market highlights include:

Out of the North Shore, Thomas Skelly has been busy with a 3 bedroom unit in Bellevue Hill that sold at auction for $190,000 above reserve in April and a 4 bedroom Victorian home ripe for renovation at 227 Norton St, Leichardt selling for $1,500,000.

International interest is increasing as we head towards Spring with 95% of the 30 groups at the first open home for 116 Carrington Rd, Wahroonga having Chinese heritage. The appeal is the substantial block size of 2,055sqm approx of flat land with the ability to build a dream home and its location close to reputable schools and the train line.

After a successful six months, we look forward to Spring where traditionally the real estate market heats up. If you’re thinking of selling or would like to know what the market is like in your local area, please give us a call on 02 8030 2552.