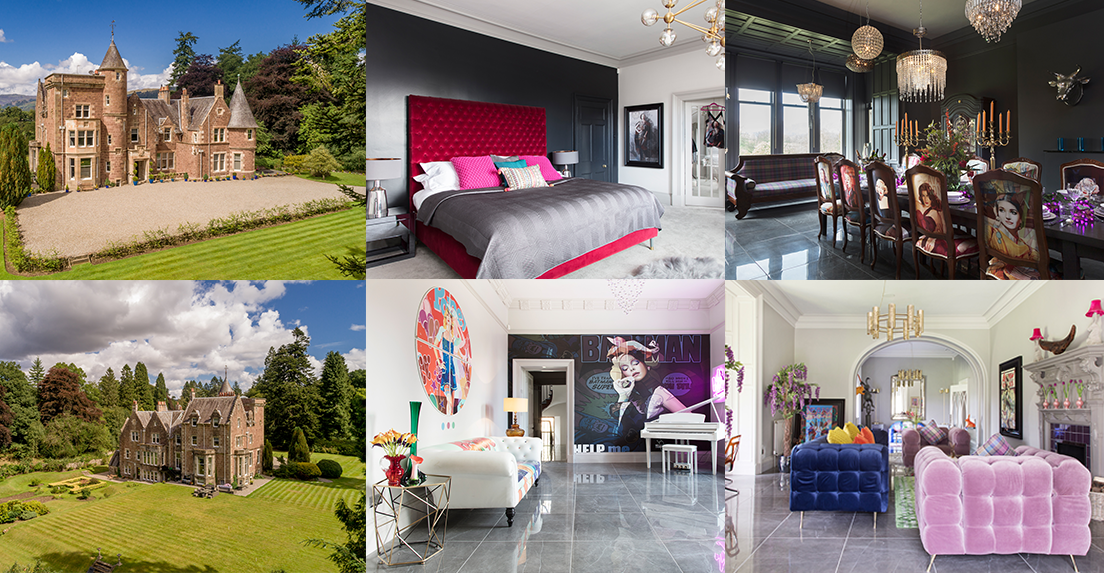 Looking out to Ben Ledi and the Highlands, just a 15 minute stroll from the pretty town of Callander in central Scotland, lies the C Listed early Victorian/Edwardian Scots Baronial mansion, The Gart. Dating originally from 1835 then substantially rebuilt and extended in 1901 after a fire, the house sits majestically above the River Teith and features impressive turrets and an interior that is nothing short of extraordinary.

Bought by contemporary artist Stuart McAlpine Miller and his interior designer wife, Nikki, in 2016, the house has undergone a remarkable transformation with cutting edge and wildly imaginative ideas aligned with exquisite attention to detail and exacting standards of finish. While period features such as panelling, fireplaces and high ceilings have all been respectfully retained, there has also been a fabulously bold approach taken, opening up the kitchen and dining room (often doubling up as an exhibition space), transforming a top floor turret room into a home cinema and so on, brilliantly offsetting the strictly traditional exterior.

Echoing the blend of the historic with the avant garde, the kitchen is a bespoke crafted affair to Nikki’s own design and even has a sculptural feel to its lines, but it also includes that country house stalwart, the Aga, the perfect foil to the super-sleek of the room. There is a glamorous fitted bar in the billiards room, a library with open fire and a light and airy morning room along with a fabulously well proportioned drawing room (which is not far off 50 feet long), all of which combine to create an exceptional level of living space.

The house sleeps a total of 26 with six bedrooms on the first floor including the sumptuous master suite with large dressing room and en suite bathroom. There are three further bedrooms on the second floor and an additional four on the lower ground floor where there is also a gym/yoga studio, office, shower room and laundry.

12 acres of glorious garden grounds include large lawns, magnificent trees, a formal sunken garden and a kitchen garden. There is river frontage to the Teith and salmon and sea trout fishing rights.

For Savills, Jamie Macnab comments: “This is quite simply an astonishing property – already a fine and substantial period house in a wonderfully scenic riverside setting, it has been given a whole new dimension by the style and workmanship and luxurious edge of the contemporary elements so boldly conceived and executed by Stuart and Nikki. Their name alone certainly adds an additional layer of interest in a sale that is bound to cause ripples not just in the UK, but also internationally.”